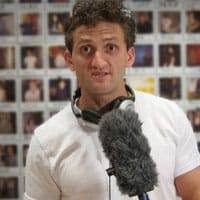 EXCLUSIVE: An Interview With Casey Neistat

The story of this post begins almost two years ago.

Back in early 2010 when I was first sending invites to creatives out there to join the Wooshii community, I exchanged a few emails with Casey Neistat. His videos were original, funny, highly creative, personal, and he (along with his brother) had a unique voice and take on things.

I’ve followed his career ever since and saw video after amazing video that he was making, as one of the top video makers on the web. Now, fast-forward to the present and past his HBO series, I reached out to him for an interview, and that is what follows.

How did you get started in all things creative, not just video?

My mom was a pretty creative person. When we were little she crashed our new Volvo 240 station wagon. Rather then getting it repainted, she painted a gigantic beehive mural on the side of the car. I grew up thinking this was how you do things.. make the best with what you have.

And what about video, how did that get started?

My older brother Van got an iMac DV, the first consumer computer to edit video, he showed me how it worked and I bought one a week later… i’ve been making movies ever since

Your videos seem to be highly personal, is that something that you think about or does it just come naturally?

I like to tell stories and stories are best told when there’s a defined perspective. Leaning on my own perspective is just what’s easiest, rather than starting with trying to figure out what story to tell i start with telling my own. It feels like cheating sometimes!

What’s the video you’re most proud of? Why?

Tough question. I don’t have an answer. Looking back, the films that i’m the most proud of are the one’s that i had no reason to make: meaning i wasn’t paid, no one asked me to make them, they were made just for the fuck of it. Those are the ones i have the most love for. Like a pro-baller playing pick-up just because he loves the game. I make a living making movies, finding time to make a movie just for fun is hard.

What was the one most difficult to make?

I’m working on a feature doc right now and cannot figure out how to finish it. Its a battle… so hard to find a 1.5 hour story in 100+ hours of footage.

I also wanted to ask about all the different ways you come up to tell the story, either if it is using a drawing, or a model, etc

Sometimes i don’t have the right footage or material to illustrate a point, so i make something: be it an animation or whatever. I use whatever i can to best tell the story… that’s part of embracing the limitations that i was referring to.

Most stuff you distribute online right? What are your thoughts on the Online Video space nowadays?

How important is collaboration in creating new videos (given that you do most work with your brother, I believe)?

My brother moved to Los Angeles more than a year ago. We had collaborated exclusively for almost 10 years prior to that. You realize how big a role collaboration makes when you start to work solo. I am surrounded by friends who work in movies, it’s an amazing resource always having someone to bounce ideas off of. Not sure i could do it without that!

The idea that there’s nothing to lose. We’re born and we die, the only two certainties in life. Constantly reminding yourself of that makes it easier to embrace risk – nothing is more precious than time, if you spend your time doing what you love well then you’re alright.

What advice would you give to people wanting to work in the creative industry or start making videos?

Just make. Don’t embrace excuses or obstacles, just keep pushing forward. So many people i meet have so many excuses… they don’t know the right people, can’t afford the right camera, don’t have the time – and so on. Just make. Embrace those limitations, make them part of the work.

Can we know what are you working on right now?

I am working on a feature length documentary I shot in Afghanistan last year. My friend is a great tattoo artist, Scott Campbell, he and I spent some time with a group of special forces guys trading stories for tattoos. It’s a great story.

Well there you have it. Love it how he ended the interview!

On Wooshii’s behalf I’d like to thank Casey once again for his time in answering these and looking forward to seeing all his future work.